In part 1 of this blog series we looked into the hot topic of Fintech, and discussed its history, current status and what it means for the financial industry. Financial technological innovations are emerging everywhere, but as briefly mentioned in the previous blog post, one country in South America is especially worth looking at, when it comes to disrupting the financial sector. Although not often considered as one of the financial superpowers of the world, Brazil is a goldmine of FinTech start-ups, and in part 2 of thi blog series, we are going to take a close look at this South American leader. We will analyse the financial sector and especially banking in Brazil, the economic situation in the country, possibilities for FinTech start-ups and the importance of localization to grow a FinTech business in Brazil.

One of the world’s biggest financial technology hubs now is Brazil, where 230 of Latin America’s 700 FinTech companies are located.[1] A 45-page report published by Goldman Sachs estimates that these 230 companies are expected to generate a potential revenue pool of 24 billion dollars over the next 10 years, and the Brazilian FinTech scene seems to be growing more than anywhere else. One of the reasons is that the banking sector in Brazil is so concentrated compared to anywhere else, as the top 5 Brazilian banks hold 84% of total loans! This number stands out significantly in an international perspective as the top 5 banks in USA, India and Turkey “only” hold 20%, 30% and 30% respectively. This unique Brazilian market structure means FinTech can potentially have a greater impact in Brazil than in other developed markets. The few decision makers are more influential and have already proven their interest in the FinTech scene.

For example, one of the largest banks, Itaú Unico Banking recently invested about 2$ billion in XP Investimentos, which is a financial service and brokerage firm. It is also worth mentioning that in Brazil, fees and interest rates for loans are among the highest in the world making the FinTech market in Brazil even more interesting and potentially more profitable for consumers and disruptors alike. As we now know, FinTech companies help banks reduce costs and improve efficiency, and this fact combined with Brazil having so high interest rates indicates that financial institutions will want to collaborate with FinTech companies to stay competitive.

The financial tech scene in Brazil has already received much attention as well as investment capital. Three of the most promising segments are personal finance, lending and payments, but there is another emerging problem in Brazil which could be an attractive challenge to solve for the innovative FinTech companies. We are here talking about another new term, namely “financial inclusion”, which revolves around making financial services affordable and accessible to all individuals.[1] Unfortunately, the particularly high fees and interest rates in the Brazilian financial sector exclude a lot of people from participating in the financial sector. Brazil has a rather large population of less well off people, and FinTech companies are now competing with each other and collaborating with banks to solve this problem. A lot of innovative services like Saffe (digital payments), Vérios (robo-advisor), Kavod (social lending) and crowdfunding [2]have already made a positive impact and cut costs for the financial institutions including more people in the financial sector, but the challenged is far from solved, as an untapped portion of the world population still remain unbanked or underbanked[3].

Around the world, 2 billion people don’t use formal financial services, and in Brazil, it is estimated that 50 million people don’t have a bank account.[4] This represents an opportunity for both established players and new innovative companies to make an impact. Especially in the north and northeast of Brazil, people have little access to banks in the rural areas, and high crime rates also pose an extra problem, as unbanked people carrying out transactions in cash are exposed to the high chances of being robbed. This challenge has been taken up by the Brazilian government in cooperation with FinTech companies with the desire to boost financial inclusion. The government approved a resolution in 2016, which made it legal to open bank accounts without the need of physical ID or proof of address. These digital accounts can be opened on any smartphone without having to physically going to the bank, and the new service catering to the poor population in Brazil already showed to have a positive impact in the first few months. One of the banks, Intermedium, increased its account numbers from 10,000 in March 2016 to 80,000 in December 2016, as they are offering unlimited free transactions.

The importance of localization in FinTech

The financial technology sector in Brazil proves to be very innovative by offering unbanked people a ticket to financial inclusion. In other words, FinTech has entered yet another interesting customer segment, and it seems inevitable that the FinTech industry is very attractive for investors, and that it is only going to grow in the future. As for any company growing and expanding, localization should be a very important part of a progressive business plan, but for FinTech it is actually even more vital to focus on translation. First of all, the competitive advantage for companies selling technology is that they’re location independent and are able to sell everywhere across the globe. Using English as the software interface language is efficient in some industries, but as financial technology sells software solutions that are supposed to handle massive amounts of money, one language is not sufficient. Why is that?

In the past, people trusted banks almost blindly, and financial institutions had this firm trust because of their size and status in society, but this changed radically after the Wall Street crash in 2008. People no longer had faith in the financial sector, and especially the banks now faced the challenge of building trustworthy relationships with their clients. This now provides a major challenge for the FinTech companies, as the more money a transaction includes, the more important is the establishment of trust. Language is inevitably a key factor in relation to creating trustworthiness for companies, and since FinTech companies sell platforms handling millions and billions of dollars, translation and localization is especially important in this industry. If a financial institution is looking to buy a service from a FinTech company, they are undoubtedly going to value being pitched in their native language. Just take a look at this graph from a report carried out by Common Sense Advisory published in 2006. 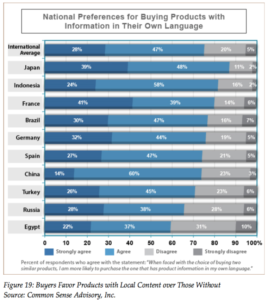 In Brazil 77% of the population preferred to buy products with information in their own language, so if you are a FinTech company, who wants to take advantage of the growing economy and profitable opportunities on the Brazilian market, you have to translate and localize your product! Let’s take a look at the services that a FinTech company would want to use. The software, whether it be a desktop, an app or both, would need to be translated, as well as potential user assistance pages, user forums and a website. There could also be marketing content and ads, which should not only be translated but potentially transcreated to engage perfectly the Brazilian consumer. To complete this task, a competent linguist would be needed, who understands financial technology as well as how it works in the Brazilian market. Ideally the localized product would be tested on the interface and the operating systems used in the country for optimal results.

I hope this blog post has been informative and given you a good overview of the impact and opportunities for FinTech in Brazil.  If your FinTech company aims to be a part of the growing economy in Brazil, you need to localize your products and supporting materials, and with the right team! Please do not hesitate to contact us for more information at info@texttrans.com

Thanks for reading, and please get in touch with your feedback, we would love to hear from you.

Maximum impact and resonance in Brazil, one of the most important economies in the world

What do you need today?
We use cookies to ensure that we give you the best experience on our website. OkRead more